A PhD economist examines FAFSA and enrollment trends, and how the Population Pyramid might affect college enrollment.

Enrollment has basically dropped each year since 2011. This trend is expected to continue even though Gen Z is more likely to attend college than previous generations, and though students are applying to more colleges since the drop in the standardized testing requirement.

This enrollment trend has important ramifications for enrollment management today and over the next decade. And we can see hints of what is to come based upon our FAFSA application experience over the past two years during the pandemic. If schools don’t find a way to incorporate this underlying trend, they will be extremely vulnerable and may in fact become financially unviable.

Why is enrollment in decline?

The analysis for this starts with what is called a “population pyramid.” A population pyramid shows different proportions of a population, usually a country, by age and sex. This allows the viewer to see if the current population is old or young, has a disproportionate number of males or females, and so on. It also allows a society to plan for the future, as, by shifting these proportions over the time horizon, one can see how many people are going to be of child-bearing age, or are going to retire, and other large-scale societal patterns over the next decade. Population pyramids usually have age on a vertical axis and a count of the number of people by sex on the horizontal axis. Thus, each row is an age group, and each side of the pyramid reflects the relative balance of the sex ratio.

Note that it is called a “population pyramid” because it looks like an actual pyramid for most countries and most times. That’s because we are more likely to die as we get older and because most countries are experiencing population growth, meaning there are a disproportionate number of young people. To illustrate, here is Uganda (high mortality and fertility rates) today: 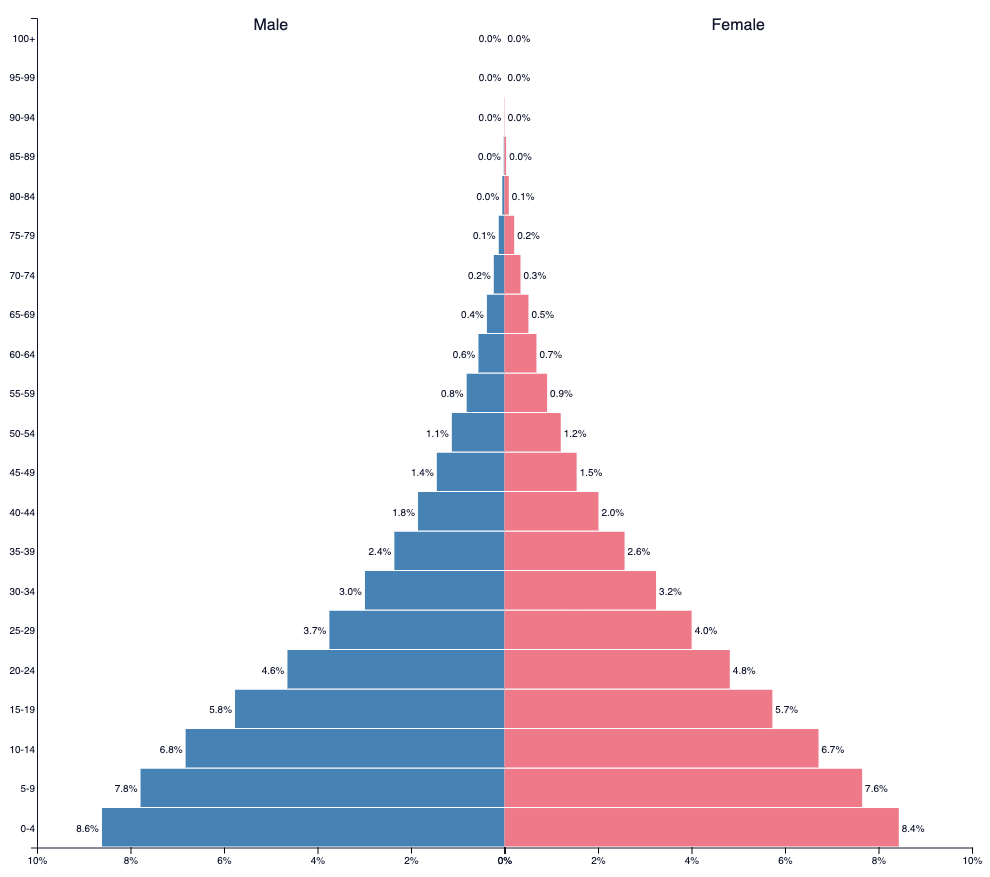 As the people within a population experience greater longevity, they soon after tend to have fewer children. This is called the “Demographic Transition.” Birth rates may drop to the point that parents aren’t even replacing themselves in the next generation, which has been happening in Europe over the past several decades. Countries that have completed this Demographic Transition have Population Pyramids that are in the shape not of a pyramid but of an ice cream cone. 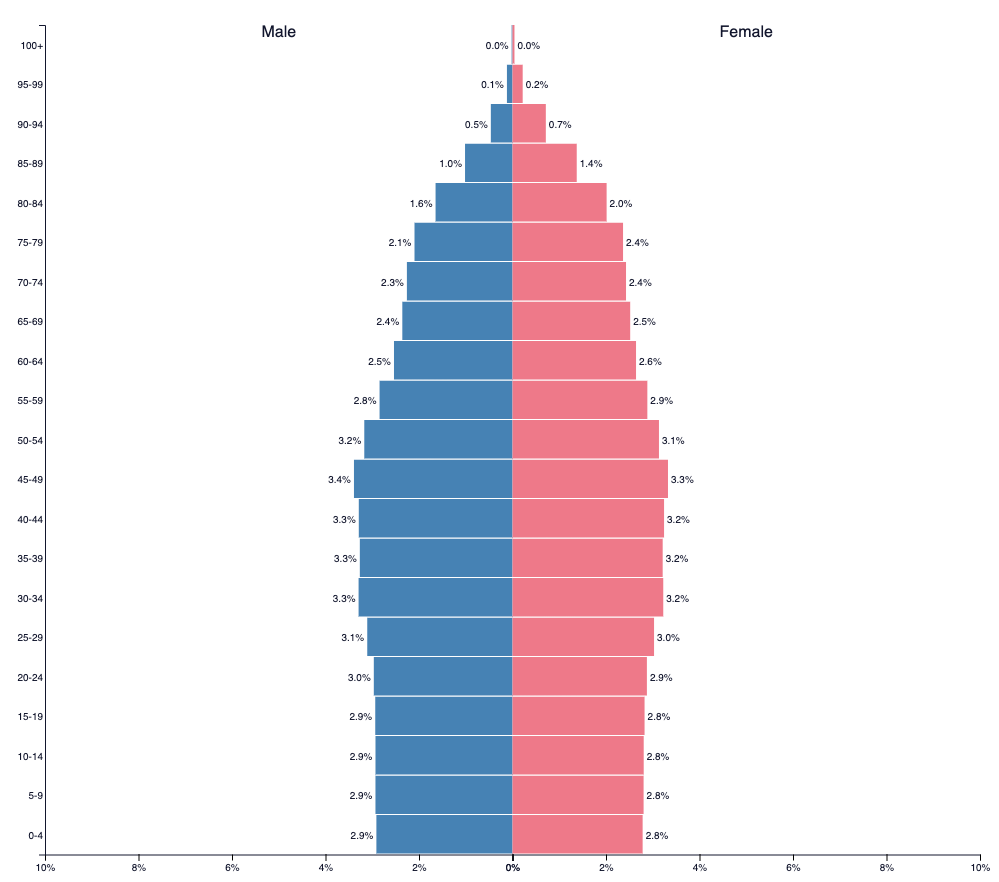 The Situation in the US

Let’s look at how the US population is expected to change over the next several decades. Here is what the expectation for the US population pyramid through 2050 was a few years ago (courtesy of the Visual Capitalist).

This was done in 2017, though, and now expectations are that there will be even fewer births than the previous forecast (other than an echo of the original baby boom of the 1940s through 1960s that should show up in births around 2030).

To illustrate, here is the population pyramid today, with more people in the 55-69 range than usual because of the baby boomers and another bump from 25-39 from their echo (kids), and another small echo coming from the kids of the kids. (Think rock splashing in a pond.) 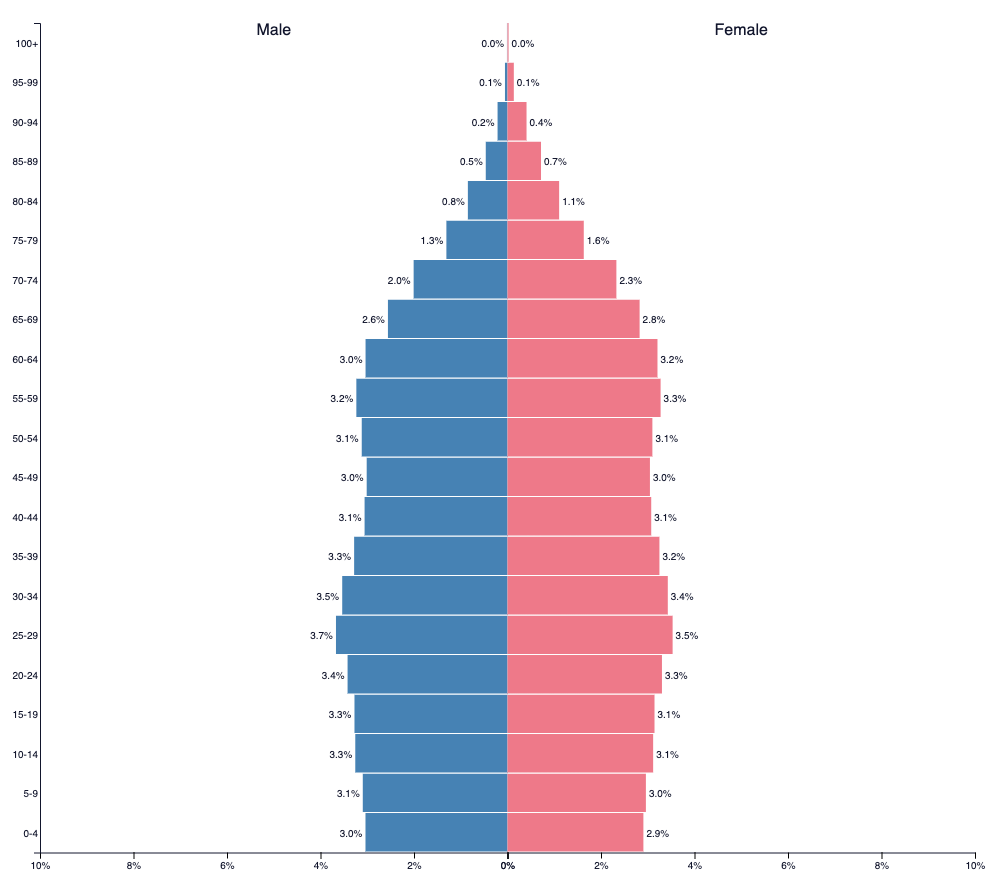 What this Means for College Enrollment

This means that we now expect that the overall population of those in their 20s is going to remain relatively constant in the US, but with two caveats.

There was a bump in FAFSA applications per person once standardized testing became optional. But this was a one-time shift because it was a one-time event. And it only reflects a given person applying to more colleges, not more people applying to college.

This fact has to be front and center in both medium- and long-term plans for colleges without a substantial endowment. Things are changing at a quick pace, and several institutions have demonstrated that there isn’t just one way of addressing this. Some have increased their enrollment breadth, approaching new populations of potential students, and others have shown that they can actually get smaller and succeed, such as by changing the type of institution they are and the type of experience they provide.

But either way something has to be done. And I’m sure that most institutions eventually will be creative in their approach while still holding true to their values. I’m curious to see what they will do.

Edmit Solutions can help your institution drive yield and improve students' ROI. For a free consultation and demo of our enrollment intelligence platform, schedule a one-on-one call with us.

As administrators contemplate their institutions’ long-term financial health, some admins are re-evaluating their pricing strategies.

Improving retention rates requires colleges to look at the whole student experience and understand what students want to get out of college beyond...

A PhD economist unpacks the ups and downs of FAFSA application volume.