A PhD economist unpacks the ups and downs of FAFSA application volume.

As admissions and enrollment managers examine the Free Application for Federal Student Aid (FAFSA) for clues about enrollment yield, they may find themselves falling into a trap:  An apparent rise in FAFSA applications might suggest enrollment will rise, too. The problem? To frame FAFSA application trends as “rising” is… not true at worst and pretty misleading at best.

This misinterpretation arises from three factors:

Starting with applications for the 2017–2018 school year, changes to FAFSA’s submission process, requirements, and methods of data collection—all engineered to increase FAFSA application volume—worked. They created a one-time increase. Thus poised was the upward trend for a fall.

Complicating matters:  A simultaneous, independent change in student behavior started a trend that has continued since. That is, many students started applying to 6 or more colleges when they hadn’t before.

With year-to-year variation this extreme, it’s likely colleges had a difficult time identifying any meaningful trends from year to year, trends that were critical for their planning.

FAFSA applications dropped in 2018–2019, as expected. Then came the pandemic in 2020–2021, when application volume fell more steeply, again as expected.

But then, so far this year, the number of total applications has increased marginally:  They’re up by about 1% as of March 2021. It’s tempting to think of that as a new trend, but we should think about it instead as a correction of the drop experienced during the pandemic, as schools moved to remote learning and the like—not as something that will continue as schools return to in-person learning.

Okay, so what has been going on that we expect to continue?

Overall, since the application peak for the 2011-12 school year (almost 22 million applicants), FAFSA applications have been going down by a material amount each year, other than for the two exceptions mentioned above. And, as of 2020-21, applicant numbers are down by almost 20% from that 2011-12 peak.

But where are these trends coming from?

Fortunately, the Department of Education has published compositional data through the 2019-20 application cycle (as of early October 2021), and those data show some clear patterns of who is driving this change.

Sex. Recent drops have not been different by the applicant’s sex, so there has not been a different experience between women and men. However, women still outnumber men by a great deal, as has been the case for decades.

Number of Applicants by Sex 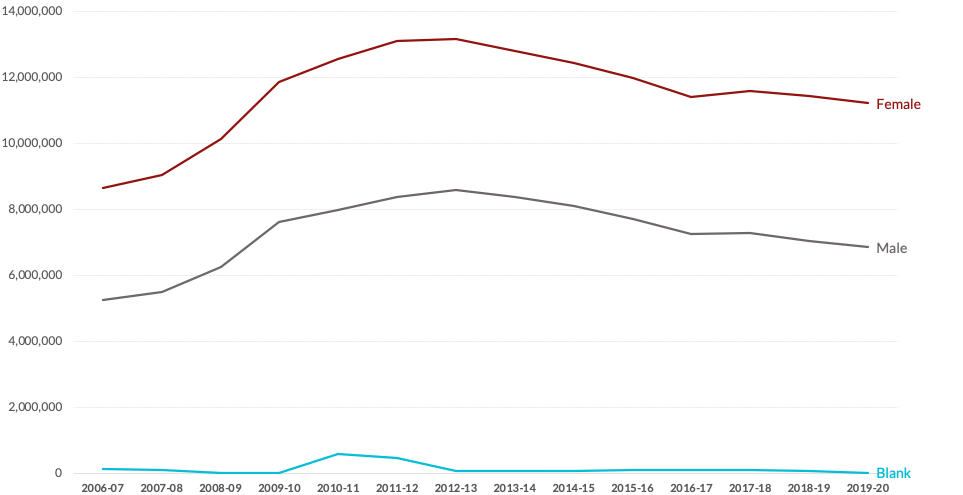 Entering Students. Among undergraduate programs, the largest drops have been both for first-time students and for students who have not completed their first year but are returning to continue their first year. So, the loss has been in getting students to attend college in the first place, not in getting them to continue once they’ve enrolled.

Number of Applicants by Class Level 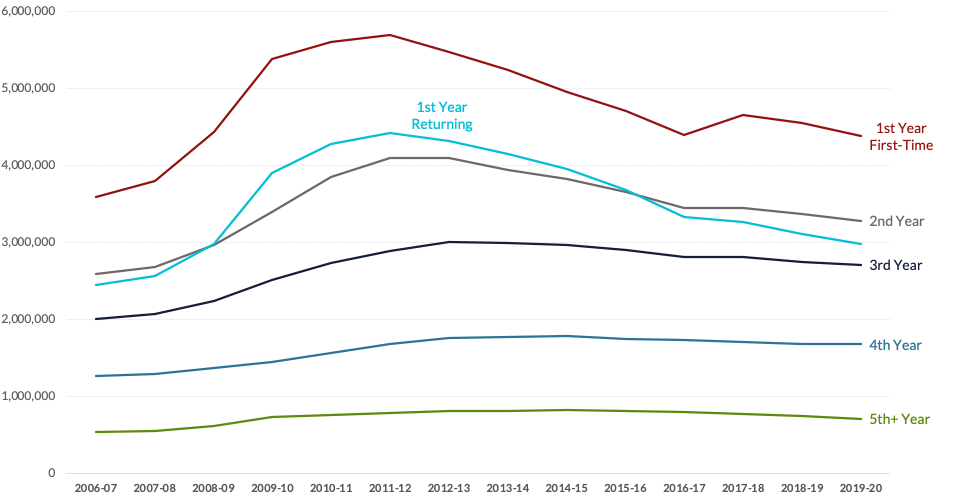 Region. In general, this has been a very broad-based drop, geographically. Yes, there has been a disproportionate drop in the Midwest, and the other 3 Census regions have had very similar and more modest drops, but they all have experienced drops. Looking at the state level, every state has experienced a decline, with the bulk of states ranging from –12% to –35%.

Number of Applicants by Geographic Region 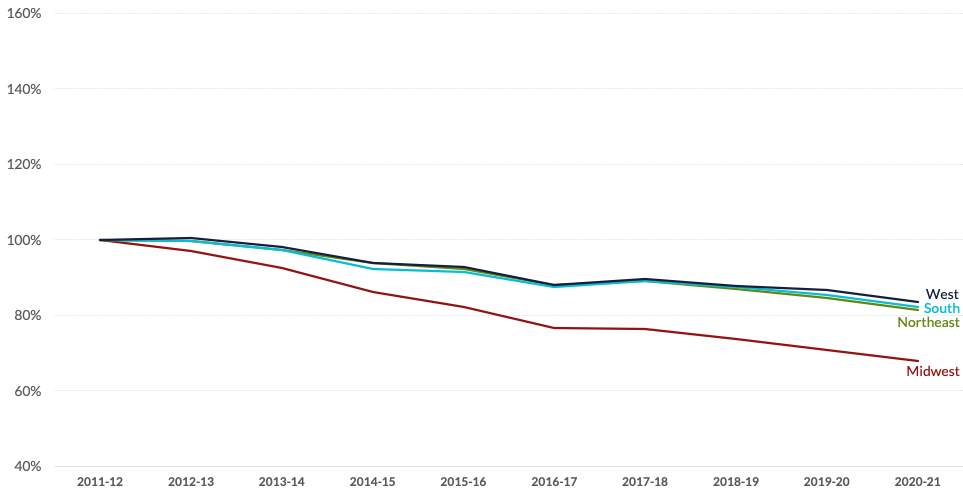 Number of Applicants by State 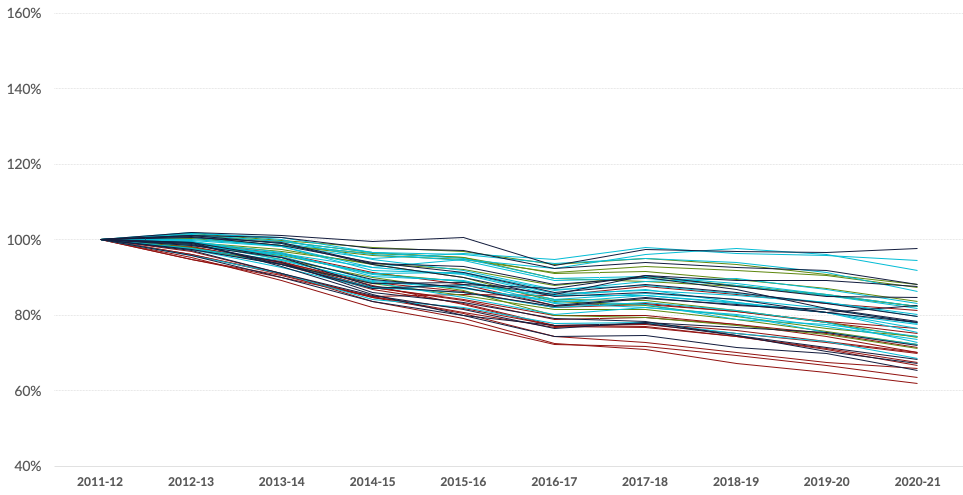 Note: States not labeled but color-coded by region.

Traditional vs Non-Traditional Students. Non-traditional students are most often defined by their age and family or financial status. In particular, students aged 25 or older, who did not start college immediately after high school, or who are financially independent students are defined as non-traditional, whereas those who enroll in college directly after high school are considered traditional. Looking at application trends between these groups, the largest application drops have been for independent students, with dependent students not exhibiting much change at all since 2012-13. Similarly, applications from those 25 or older have seen a larger drop than from those 19-24, although both groups have seen drops. Combined, this means that the largest drops have been almost exclusively for non-traditional students.

Number of Applicants by Dependency Status 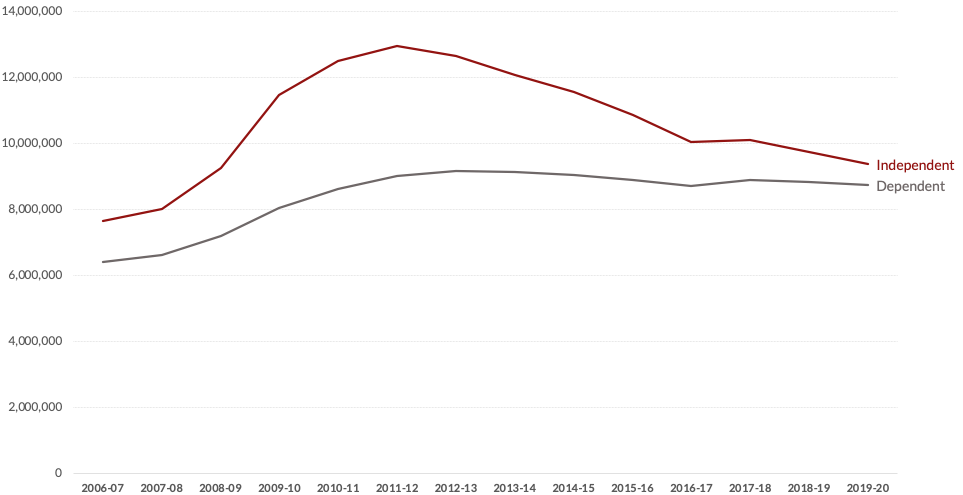 Number of Applicants by Age Group 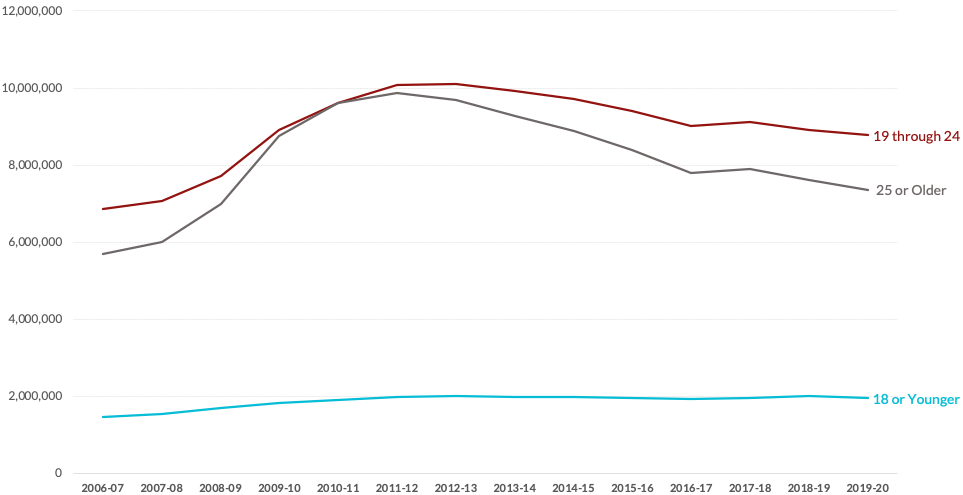 Vulnerable Populations. But the most important drops have been for the populations that have the most to gain by attending and completing college—and the most to lose by completing some college and leaving with debt but no degree. In particular, Pell Grant-eligible students have filed fewer applications each year, but students not eligible for Pell have not seen much of a drop at all over the past decade. Similarly, students whose parents did not complete college have seen stark drops over the past 10 years, but students from families where both parents completed college have actually seen an increase over this time period. 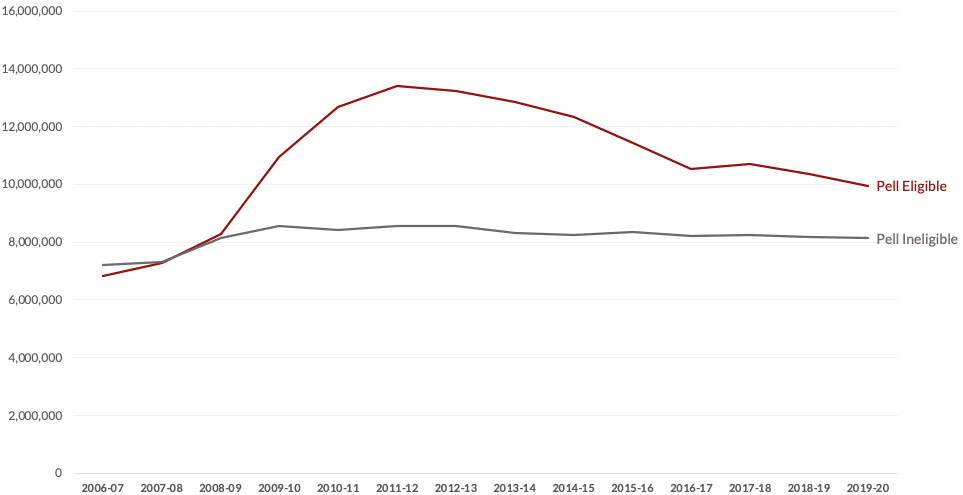 Number of Applicants by Parental Education 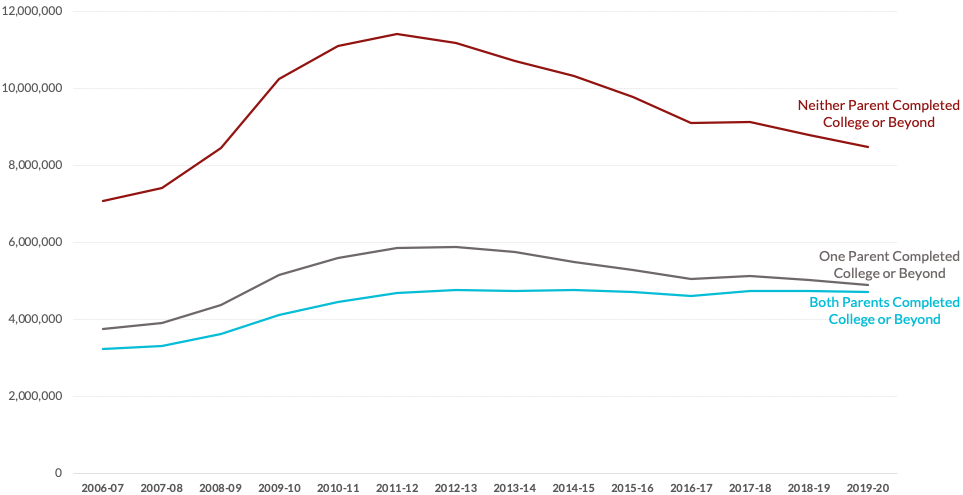 As the Hechinger Report stated earlier this year, “FAFSA filings remain especially depressed at high schools with higher concentrations of students of color, in rural areas and small towns[,] and in low-income schools everywhere.” And FormYourFuture found that, as of September 2021,  high schools where more than 40% of students are students of color have seen a 7% drop in applications, compared to a 2% otherwise.

Looking at each of the application segments, there are some disturbing trends regarding the composition of college applicants. The most vulnerable students—those who are entering school for the first time, those who are Pell eligible, and those whose parents do not pass along a tradition of postsecondary education—are the one who have seen the greatest declines in college application and enrollment.

The Department of Education has made several permanent changes (and one temporary change) to the FAFSA itself and the FAFSA application process that are designed to increase utilization:

But that is not going to be enough. Schools at both the high school and college levels are going to have to take a more active role in cultivating enrollment than they ever have before. High school counselors will have to find new ways to promote college enrollment and the importance (and ease) of FAFSA applications for their students, particularly the most vulnerable ones. Colleges will have to improve and communicate the benefits they provide–such as their return on the investment of time and money—and the role they play in providing financial security and the ability to start and thrive in a career.

Yes, so far applications look good this year. We'll see how those enrollment numbers bear out come decision day. And next year.

As administrators contemplate their institutions’ long-term financial health, some admins are re-evaluating their pricing strategies.

Improving retention rates requires colleges to look at the whole student experience and understand what students want to get out of college beyond...

A PhD economist examines FAFSA and enrollment trends, and how the Population Pyramid might affect college enrollment.